Notice: Trying to access array offset on value of type bool in /var/www/wp-content/themes/Divi/includes/builder/functions.php on line 876
 Covid-19 has closed Broadway shows and may have a huge impact on Broadway theater companies - Walking Path Entertainment 
Warning: A non-numeric value encountered in /var/www/wp-content/themes/Divi/functions.php on line 5763 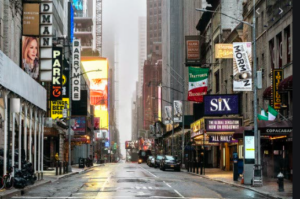 The Walking Path Entertainment producers are concerned about the impact of the Covid-19 virus on Broadway theater companies.

Our play Exit Strategy was moving toward a Broadway production earlier this year when the pandemic changed everything. Even with closing businesses, including theaters, the pandemic hit New York city residents hard. No one knows when life, and theater, will return to normal. Below are excerpts from a recent Forbes article.

At particular risk are the city’s arts institutions, including hundreds of theater companies which support its cachet as America’s cultural hub. If the proposals are adopted, the Department of Cultural Affairs (DCLA), which allocates public funding for such organizations, will see its budget slashed by $75.4 million – a 35% reduction from the previous year.

“Most of our members rely on DCLA funding, and for many of them it’s their largest grant,” says Ginny Louloudes, executive director of A.R.T./NY, a service organization that supports over 400 theater companies in the five boroughs. ‘This is really, really bad. For everyone.”

Many such theaters draw from the same funding sub-pool, labeled “Cultural Programs” in the DCLA’s budget. The initial January proposal had already cut away millions compared to the prior year, when it $84 million to allocate. If the new revisions are approved, that pool will shrink even further, to just $29 million – a reduction of almost two-thirds.

Since March 12th, Broadway has been dark, and nearly all the smaller theaters in town have followed suit. The Broadway League, one of the industry’s trade organizations, set a hopeful re-opening date of June 7th, which is all but guaranteed to be pushed back further, possibly into next winter. A recent survey by Shugoll Research, a national marketing research firm, showed that even if theaters re-opened this summer, only 25% of ticket buyers would feel safe seeing a show.

…The arts aren’t some glitzy barnacle clinging to the Good Ship NYC. They represent a significant piece of the city’s economy, and workforce. According to League research reports, Broadway alone accounts for almost $14 billion in economic impact each year, and supports 87,000 jobs, both directly and in ancillary business like hotels and restaurants, which thrive off the tourist traffic; 14.6 million people attended a Broadway show in 2019.

Many of those jobs will be among the 500,000 lost by September, if the city’s projections hold up. And that’s just Broadway. The 400+ smaller theaters often partner with local bars, restaurants, and hotels, becoming community hubs in their own right, and employing thousands of full-time, part-time, and freelance workers.

If the budget is passed as is, it will hamstring a key pillar of the city’s economic and cultural fabric, and could sound the death knell for a multitude of small institutions that received support last year.

Question: When would you feel comfortable going to a NYC show?